Rainbow trout are one of the most popular and easy of all trout to catch. They are found througout North American, including Canada and Mexico, and will take a wide variety of baits and lures. The most popular technique for catching rainbow trout is fly fishing, but they can also be caught using bait casting, spin casting and upstream casting.

How to Identify Rainbow Trout

Rainbow trout vary in size and coloring. They can be blue, green, silver or yellowish in color. Rainbows usually have white bellies and numerous black spots on their upper bodies, upper fins, and tail. Rainbow trout found in lakes tend to be more silvery in color than their river-dwelling counterparts. 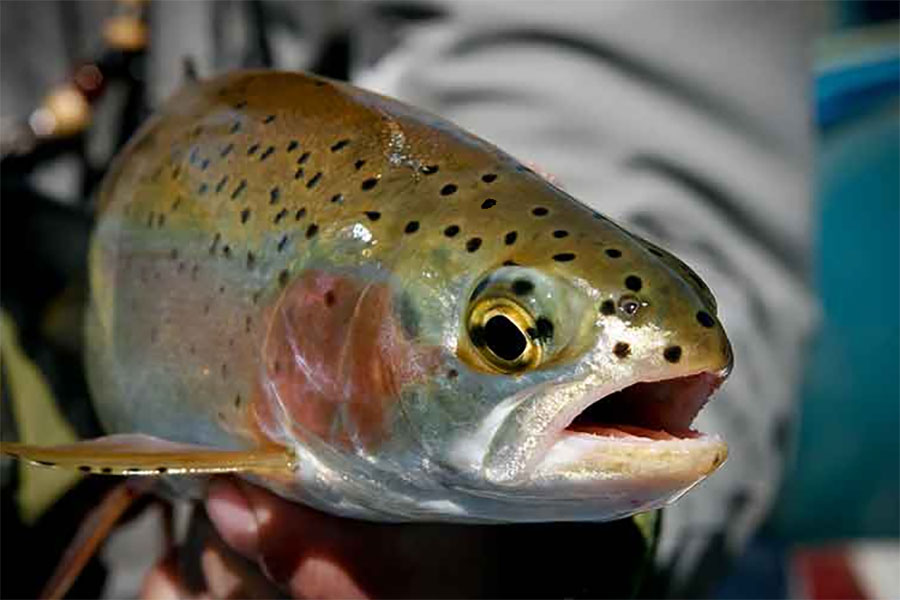 Adult rainbow trout with traditional speckled black spots on upper body and fins.
Most rainbow trout have a distinct horizontal pinkish-red stripe running from the gills along their sides to the tail as shown in the image below. The red sides tend to be most pronounced in breeding males. In lake-dwelling rainbows the pinkish-red stripe along the side is subdued or completely non-existent. 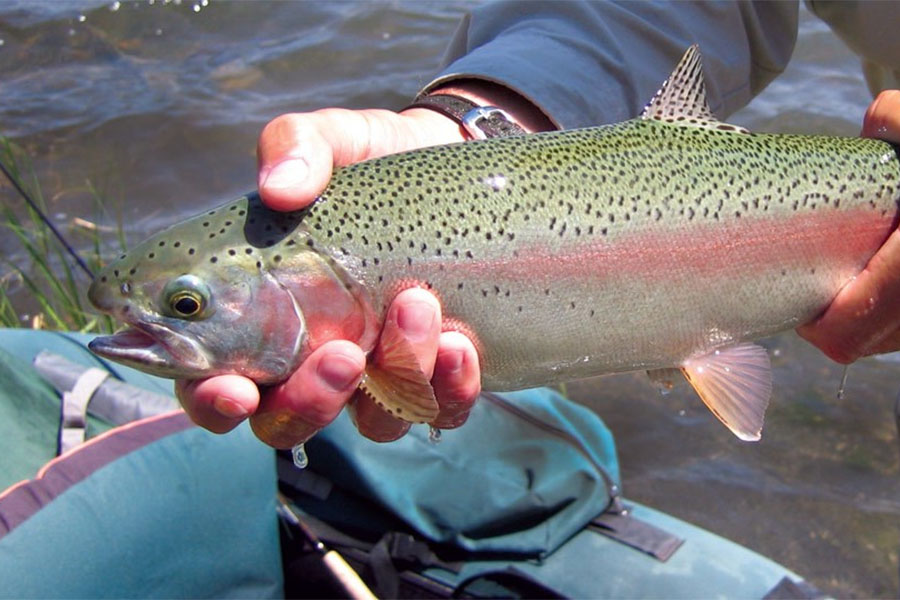 Rainbow trout with typical pinkish-red sides extending from gills to tail.
On average, rainbow trout weigh between 2 and 8 pounds, but a few specimens have reached over 50 pounds. In the wild, it’s very rare to catch a rainbow in excess of 30 to 40 pounds. A large adult rainbow trout can reach 45 inches in length, but that’s the exception. The average length of most adult rainbows is between 15 and 25 inches. The following photo of a rainbow caught in Hatchery Creek in Kentucky is what I’d consider a large rainbow. 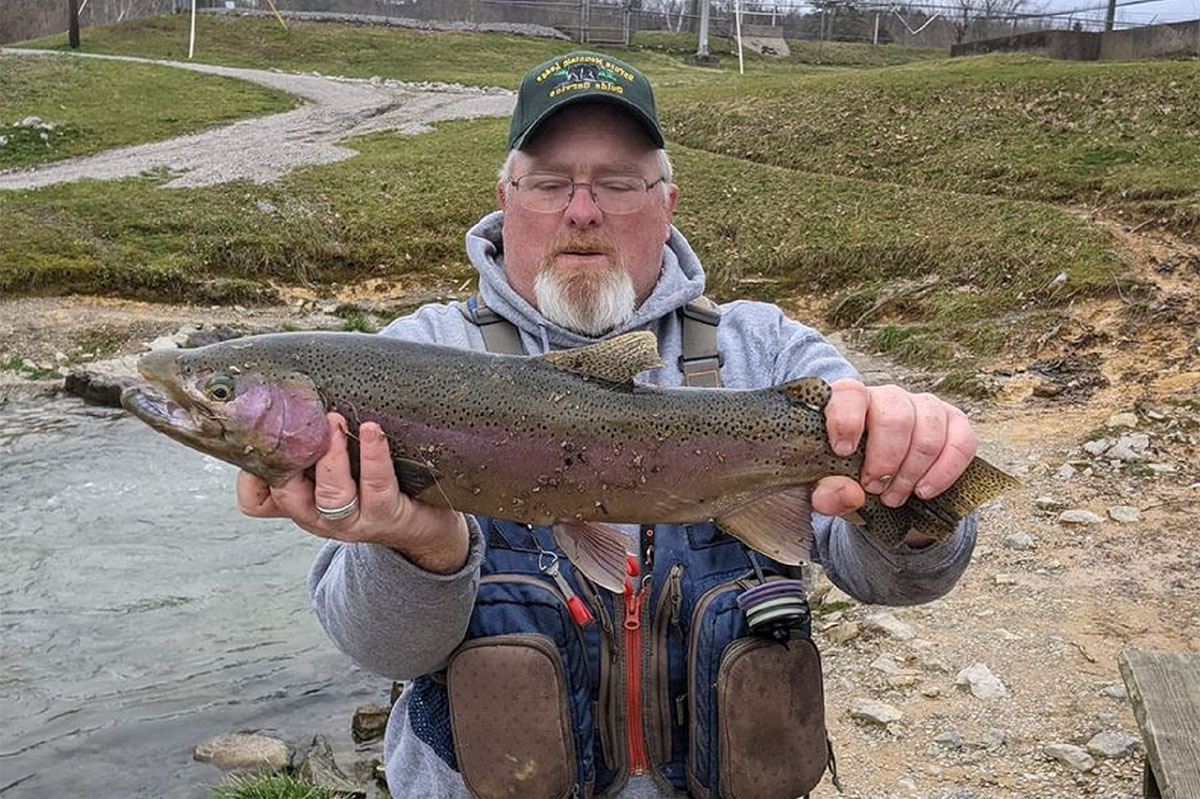 Large rainbow trout catch in Hatecher Creek, Kentucky.
Juvenile rainbow trout have different coloring and marks than adult rainbows. The most distinguishing difference between adult and juveniles are the dark vertical bars that run along the sides of juvenile rainbows. In a few subspecies of rainbow trout, including the redband and golden trout, the parr marks typically remain into adulthood. 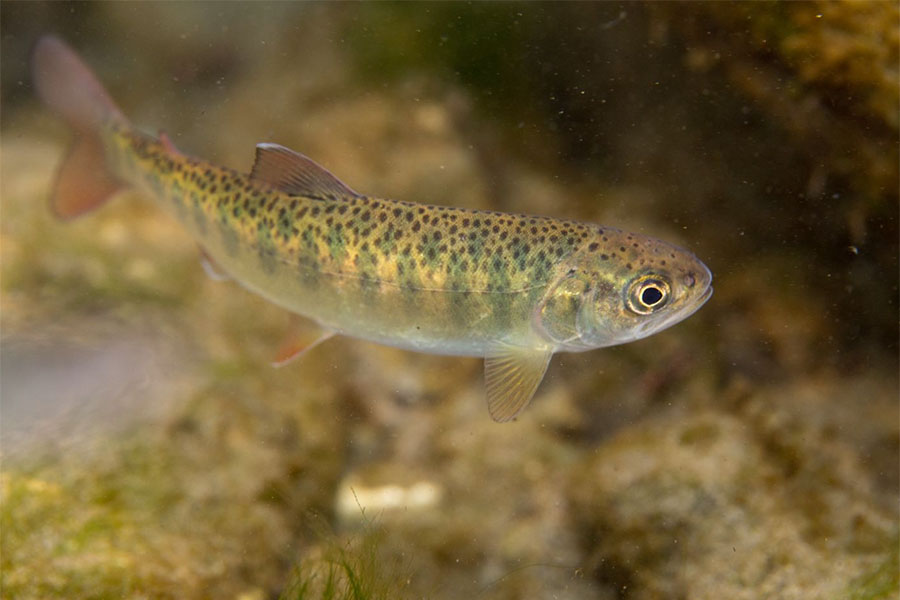 Juvenile rainbow trout with typical dark vertical parr marks along its sides.
There are several factors beyond genetics that influence the size of rainbow trout. These include:

Trout size can vary significantly from one habit to the next. Larger rainbow trout in the 5 to 10 pound and 15 to 25 inch range are likely to be found in streams, rivers and lakes with optimial conditions. Rainbows found in poorer conditions are typically smaller.

Where to catch Rainbow Trout

Rainbow trout are found in freshwater streams and rivers throughout North America. They are native to the west coast of southern Alaska, Canada, the continental U.S., and Mexico. Other than their native waters, rainbow trout can be found in fresh waters in southern Canadian provinces as far south as northern Georgia and Alabama, including the Great Lakes and Appalachians. They also inhabit streams and rivers from the southeastern U.S. to western Texas. The largest populations of rainbow trout are found in the northeastern United States. Rainbows are rarely found in the central U.S.

If you want to catch large rainbow trout, I highly recommend taking a trip to Alaska. Several of Alaska’s rivers, including the Naknek and Kvichak River, provide some of the best fishing for trophy rainbow trout. Excellent rainbow trout fishing in Alaska can also be found in the Upper Cook Inlet, Kodiak Island, and Copper River drainage.

Some of my favorite state-side destinations for fishing rainbows include:

There are many more lakes, streams and rivers that offer superb rainbow fishing, but these are a few of my favorite. 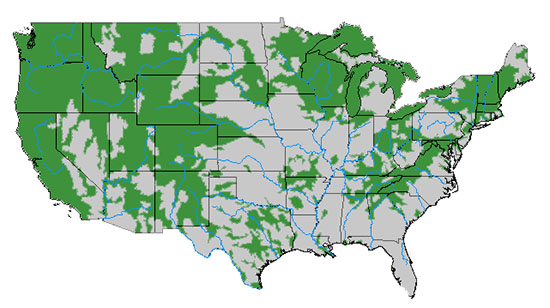 Rainbows prefer shaded areas with abundant natural cover and vegetation. They are found in streams and rivers where currents are strong, as well as deep, cool lakes and waterways. Rainbows thrive in water that supports an abundant source of aquatic and terrestrial insects, minnows, and crustaceans.

Fishing for Rainbows in Moving Water

Rainbow trout can be found in most parts of a moving stream or river. However, you’ll catch most rainbows in deep slow-moving pools near natural cover. Rainbows also tend to congregrate above and below dams, riffles, log jams or other natural barriers that slow the flow of water and allow water to pool. Shaded areas along a river bank, and other areas that provide cover are also prime rainbow habitat.

Fallen trees and rocks serve as a current break for trout trying to conserve energy. Cast your line in water pockets that form behind boulders, along current edges where the water slows, outside bends, and near deep undercut banks and you’re sure to find rainbow trout.

When fly fishing in current, it’s best to cast your fly upstream and allow it to float down over any area where fish may be hiding. This technique will greatly improve your catch rate, especially when fly fishing fast moving streams and rivers.

Fishing for Rainbows in Still Water

When fishing for rainbow trout in still water, such as ponds and lakes, the key to finding them is to find cover. Targeting cover, including weedbeds, rock piles, fallen trees, or even under a dock, are your most likely bets for catching rainbows.

Still waters can be fished for rainbows using either fly fishing gear or a traditional casting rod. When fly fishing, you need to land your fly as near as possible to the location of the trout. When bait casting, you’ll want to cast into, or over, the cover where rainbows are found and then pull your bait or lure through the cover.

The following are likely habitats where you can catch Rainbow Trout:

When to Catch Rainbow Trout

Rainbow trout can be fished year round but some seasons are better than others for fishing wild rainbows. I’ve found that spring and fall tend to be the best times of year for fishing rainbows as this is when water temperatures are ideal (45 to 65 degrees Fahrenheit.) In some areas of their range, rainbow trout fishing is also productive throughout the winter months.

Rainbow trout will feed throughout the day but early morning and late afternoon when sunlight is weakest tend to be the most productive hours of the day for fishing rainbows.

How to catch Rainbow Trout

Rainbow trout are a favorite among fly fishermen. These fish are lively, strong, and enjoyable to catch. Look for them in downstream flows or near shorelines with a lot of gravel. During the summer months, they tend to go to the deeper, cooler waters. The best time to fish for rainbow trout is at dusk or late evening when they feed. Anglers can use various methods and technique to catch rainbows, including drifting an artificial lure, dry fly fishing, hanging a lure below a bobber, or nymphing fly fishing.

The following are the most popular fishing methods and techniques for catching Rainbow Trout:

Rainbow trout are aggressive feeders and will take a large variety of baits, including worms, roe, insects, leeches and egg sacks. When available, crustaceans—such as shrimp and crayfish—are also great rainbow trout bait.

When fishing with aquatic or terrestrial insect bait, always try to match your bait to the trout’s natural food source. Targeting trout using a bait they’re familiar with will increase the likelihood of a bite.

Rainbows will also take a variety of artificial lures. Inline spinners, spoons, plugs and flies are all excellent choices for targeting rainbow trout. Its important when fishing with flies to “match the hatch”. Select fly patterns that match the seasonal fly hatches along the portion of river or stream you’re fishing.

Dry flies, wet flies, nymph flies, emergers and streamers are all great for getting hungry rainbows to take a bite. Some of my favorite dry flies include Parachute Adams, Elk Hair Caddis, and Chernobyl Ant. Emergers I use to reel in trophy rainbows include RS2, Sparkle Pupa and Klinkhammer. Nymph patterns including Pheasant Tail, Prince Nymph, and Gold Ribbed Hare’s Ear are great options as well. Classic streamers including the Wooly Bugger (black or white), Morrish Mouse and Clouser Minnow will also reel in trophy rainbows.

The following chart shows recommended baits and lures for fishing rainbows based on your chosen fishing technique.

The fishing tackle and gear required for rainbow trout will depend on the fishing technique you choose. The following is a list of the gear I recommend for each method of rainbow trout fishing.

The following is recommended gear for fly fishing for rainbow trout.

The following is recommended gear for spinning for rainbow trout.

When selecting terminal tackle for rainbow trout fishing there are couple things you want to remember. First, rainbow trout have great eyesight. If you use a heavy fishing line, you’ll scare off a lot of trout. You want to use the lightest fishing line you can get away with. I typically recommend using a 4-6 pound flourocarbon line.

You also want to use a small hook size. Not only do rainbow have excellent vision, they also have small mouths. The smaller your hook, the more likely a rainbow will take your bait.

Using a light line and small hook will greatly increase your catch rate with rainbows, especially in rivers and lakes where there’s a lot of fishing pressure.