Fishing with a Baitcaster Rod & Reel

A more complicated complement to conventional spinning reels are the baitcaster reels. Although these reels can be intimidating at first, with careful preparation and a bit of trial and error, you can take your fishing to a new level. Even though the chances of a backlash are high initially, that should not keep you from learning how to use a baitcaster. Practice will help refine your casting with a baitcaster and open new methods and tactics for fishing your favorite spots. 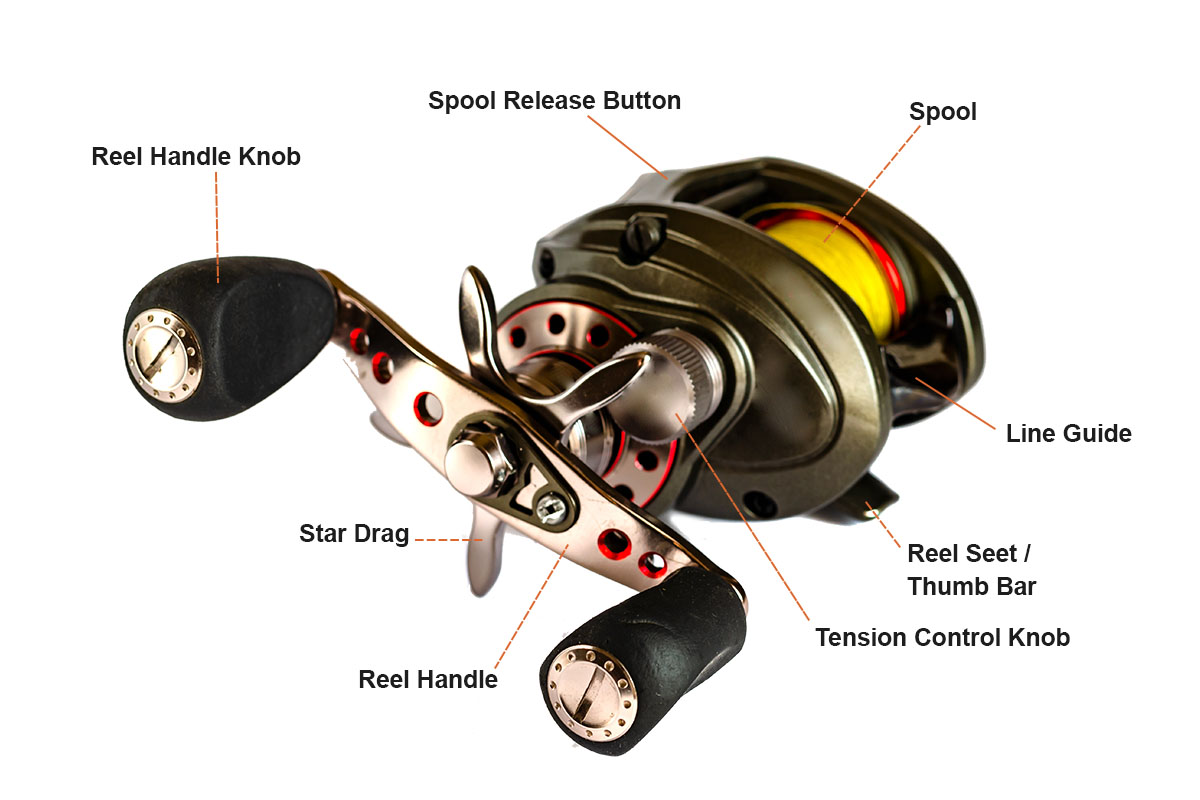 Baitcasting tackle excels at throwing heavier lines and heavier lures where conventional spinning tackle would otherwise struggle. Baitcasters offer significantly more control over a cast and distance than spinning tackle. Once mastered, baitcasters are considerably less tiring to throw for extended periods, making them a favorite amongst professional anglers.

When to Use a Baitcaster Reel

The following are the situations where using a baitcaster is ideal.

Baitcasting is a popular fishing method used by freshwater and saltwater anglers worldwide. However, there are pros and cons that you should consider before taking up baitcasting.

The Four Systems of a Baitcaster

All modern baitcasters require the mastery and usage of the below three systems to be successful when using a baitcaster. These systems are the braking system, spool tension system, thumb system, and drag system.

Most modern baitcasters have an adjustable braking system on their reels, typically on the opposite side of the reel itself. This system is designed to limit the rotation of the spool immediately after a cast is made when the most energy is exerted on the spool. This system is your primary preventative system to stop the backlash. The system is designed so that the faster the spool tries to spin, the more force the braking system will use to slow it down until an equilibrium is reached.

On most baitcasters, the braking system is the beginning angler’s first line of defense to preventing backlash and learning how to cast. Professional anglers usually adjust this system when changing line sizes or fishing in heavy wind. As your skills improve with your baitcaster, try lowering this value now and again to see how your casting distances improve.

Because this system remains constant for an entire cast, this system is the angler’s primary method of refining the spool’s speed when using or switching between baits of different sizes and weights. For example, when flipping a heavy jig, this system can be tightened up, and when throwing lighter crankbaits or jerk baits, the system can be loosened. This system is impossible to adjust during a cast and requires careful refinement based on external conditions before the cast is made.

The angler’s thumb is often the final defense in preventing the backlash of a baitcaster; however, that does not mean your thumb is required for every cast. If the braking and spool tension systems are set perfectly for the conditions, then you will almost never have to use your thumb for anything other than stopping the spool’s rotation at the end of your cast.

Unbalanced braking or tension systems are common, especially for beginners when using unfamiliar tackle. The thumb is invaluable for moderating the spool’s speed until you get the perfect settings. A gentle feathering of the spool during a cast can prevent backlash and drastically slow down the line speed placing baits with absolute precision. Professional anglers often use their thumb to place baits near structures accurately or when setting the hook. Becoming proficient with your thumb when using a baitcaster is necessary to use the baitcaster reel to its full potential.

Although not crucial for casting, the drag system is the final part of a baitcaster all anglers need to be aware of. The drag system dictates how much pressure can be put onto a fish before the spool is forced to rotate. Typical drag systems on modern baitcasters can range from 20-30 lbs. of drag when tightened all the way but drag this tight is rarely needed. Your drag should be adjusted tight enough that your bait isn’t pulling it out but loose enough to pull out by hand without breaking the line.

Exceptions to setting your drag relatively loose exist, but only under certain circumstances. For example, when fishing heavy structures or vegetation, it is common to use extremely heavy braided lines with a small fluorocarbon leader on a baitcaster. Lines this heavy are used to prevent big fish from wrapping up lines on the underwater structure. Baitcasters, paired with these heavy lines, need robust drag systems to rip the fish out of the structure and out of the water.

The Three Casts of the Baitcaster

Now that you understand the basic systems that control the spool’s rotation, it’s time to start making some casts. There are three different casts that baitcasters can make, the overhand cast, the sidearm cast, and the underhand cast or “flip.”

For beginners, or when buying new tackle, master the overhand and sidearm casts first. These casts will give you a good feeling of how the reel operates and the speed at which the spool spins. Once you get these casts down, start flipping. See where it takes you!

Steps to Casting with a Baitcaster Reel Overhand/Sidearm

Steps to Flip a Baitcaster

If you are ready to start flipping, I assume you are well-versed in casting both overhand and sidearm using a baitcaster. To practice the Flip, I highly recommend getting a small bucket or bowl and attempting to land a half-ounce lead weight at increasingly larger distances before trying it on the water.