Atlantic Croaker, also known as Hardhead, Roncadina or Croaker, is a bottom feeder that can be found in estuaries, bays, offshore deep holes, channels and coastal waters in depths of 25-260 feet. The best technique for catching Atlantic Croaker is bottom fishing using natural bait such as squid, shrimp or clams. They will also take bloodworms, squids (or clams), lures that glisten, like a spoon or underspin.

How to identify Atlantic Croaker

Atlantic croakers typically weigh about two pounds and are as long as 12 inches; however, they can reach up to four pounds. They have ten small barbels on their chin that help distinguish them from other fish. These barbels and their downward mouth help them to find food along sea bottoms. The body of the Atlantic croaker has a lateral line that goes to the end of the tail. They also have dark-green/brownish vertical stripes on their sides. When these fish are fully grown, their bodies have a silver/pink iridescence. During spawning, Atlantic croakers make a croaking sound by vibrating their swim bladders.

Where to catch Atlantic Croaker

Atlantic croakers are abundantly found in the coastal Atlantic waters from the Gulf of Mexico up to Massachusetts. During the spring and summer, they tend to stay in bays and estuaries, whereas in the fall, they venture offshore for spawning.

These fish can usually be found in water that is between 26-266 feet deep. They prefer areas with muddy bottoms with temperatures that range from 60.8 to 77°F. 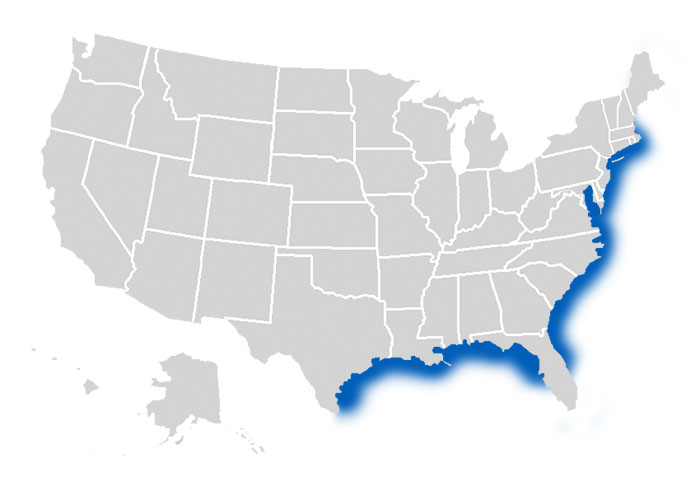 The following are habitats where you can catch Atlantic Croaker:

How to catch Atlantic Croaker

Atlantic croakers aren’t very difficult to catch. They are most common caught bottom fishing in nearshore waters using natural baits including shrimp, cut squid, claams or pieces of peeler crab using a bottom rig. The best areas to try are holes and channels that are roughly 25-30 feet deep. The most successful time to fish for them is just before or after the high tide. Bottom fishing is also effective for catch Atlantic Croaker.

The following are effective fishing methods and techniques for catching Atlantic Croaker:

The most successful type of bait to use to atch Atlantic Croaker is something natural, like squid, shrimp, bloodworms or clams. They also respond well to lures such as spoons and jigs.

The following are fishing lures, bait and tackle that can be used to catch Atlantic Croaker: