Yellow perch are often targeted by anglers, especially those who enjoy ice fishing. The largest populations can be found in Canada and the northern U.S., though they’ve also been seen in South Carolina and a few other states further south. To catch these fish, anglers use various techniques, such as bait casting, drift fishing, fly fishing, still fishing, and trolling.

How to identify Yellow Perch

Unlike the white perch, yellow perch are actually members of the perch family. Their coloring is yellow with several dark, vertical markings extending from its back down to the bottom flanks. These fish tend to be on the smaller side, generally weighing from four to 12 ounces.

Where to catch Yellow Perch

Yellow perch are found all over southern Canada, and northeastern U.S. Many states stock these fish, which has led to its widespread distribution. It can be hard to find them in the south, midwest, and west. They are often found from South Carolina’s Santee River drainage up to the border of British Columbia, and eastward to the Great Lakes. In Canada, there’s a small, thriving population that lives from the Great Bear Lake to Great Slave Lake. 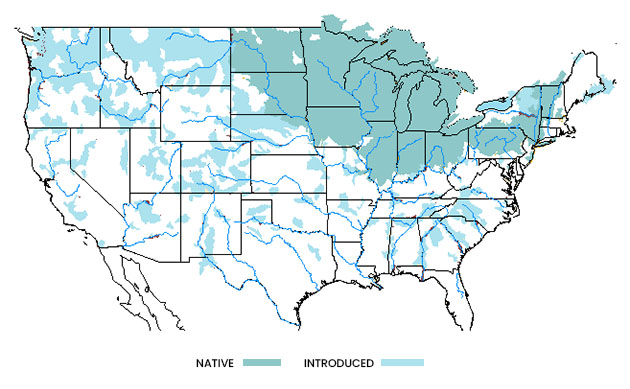 The following are habitats where you can catch Yellow Perch:

How to catch Yellow Perch

Yellow perch are highly desired by anglers. They can be caught year round and will put up quite a fight when hooked. They aren’t picky about bait and will eat just about anything. They feed year-round, even in winter, and are often a favorite of anglers who enjoy ice fishing. Spin casting is a good technique to use for these fish. Other effective methods include Yellow perch tend to swim in schools of 200 or more, so they are relatively easy to spot.

The following are effective fishing methods and techniques for catching Yellow Perch:

Yellow perch can be caught with both natural bait and lures. For natural bait, try worms or minnows. For lures, good options include spinners and spoons.

The following are fishing lures, bait and tackle that can be used to catch Yellow Perch: