Shortfin mako sharks, also known as bonito sharks or blue pointer, can be found from Nova Scotia to the Gulf of Mexico a long the East Coast of the United States. As with most sharks, chumming is an effective way to attract Shortfin mako sharks. Effective methods for catching these sharks include night fishing, drift fishing, and saltwater trolling

How to identify Shortfin Mako Shark

There are two common species of Shortfin Mako Shark, the Pacific Shortin Mako and Atlantic Shortfin Mako. They are similar in appearance.

The shortfin mako shark is the fastest shark, swimming up to 45 mph. This shark is also known as the “blue pointer” or “bonito shark.” Shortfin makos stand out from other sharks because of their distinct coloring and protruding teeth. Their coloring on their backs ranges from vibrant blue to purple, while their sides are silver, and their abdomens are white. Their mouths and the underside of their snouts are also white. The shortfin mako shark’s teeth are very long and protrude from their mouths when their jaws are closed. Shortfins grow as long as 13 feet and can weigh up to 1200 pounds.

Where to catch Shortfin Mako Shark

Atlantic Shortfin Mako sharks are found from Browns Bank near Nova Scotia to the Gulf of Mexico and Argentina. They’re usually found in areas with plenty of swordfish because this is their favorite food. They usually stick to the open waters and are often spotted near the surface.

All species of Shortfin Makos are highly migratory and will swim long distances. They are most abundant in tropical and temperate oceans. While adults are found in open waters offshore, juveniles are tyically found in nearshore coastal waters. Shortfin Makos typically inhabit the upper water column. 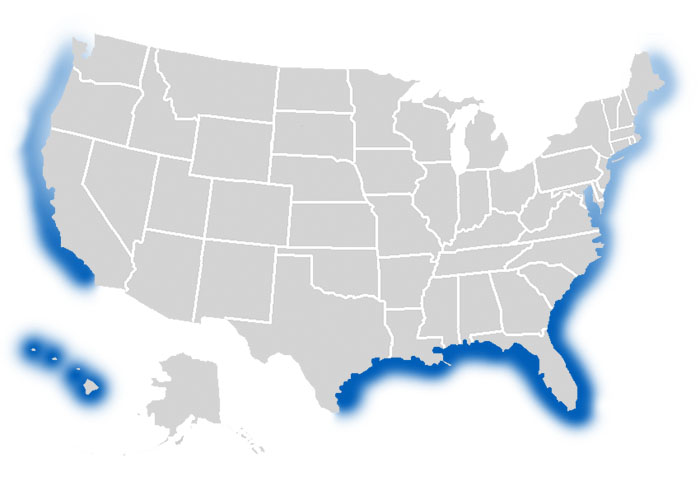 The following are habitats where you can catch Shortfin Mako Shark:

How to catch Shortfin Mako Shark

Chumming is a must when it comes to catching shortfin mako sharks, so bringing along a big chum bag is recommended. For gear, anglers should choose 8/0-11/0 hooks and plenty of steel leader equipped with a crimped barrel swivel on one end. It is advisable to use a big-game rod and reel combination with a minimum of 500-yard, 50-pound test line. Bait should be cast out to the center of the chum slick and allowed to settle 30-50 feet down. Anglers should check to make sure that it’s not too far from the rear of the boat. Once a shortfin strikes, it is advisable to wait long enough to ensure the hook’s in the mouth before setting the hook. Anglers should avoid yanking or jerking when setting the hook, but rather employ a strong, consistent pull while reeling. This method works better for setting a hook. Other good methods to try include night fishing, drift fishing, and saltwater trolling.

The following are effective fishing methods and techniques for catching Shortfin Mako Shark:

The best bait to use for shortfin mako sharks is bluefish. Other effective baits include menhaden, squid, and mackerel.

The following are fishing lures, bait and tackle that can be used to catch Shortfin Mako Shark: