Striped marlins are known to be fierce fighters that will leap into the air when caught. They can be found in the warmer parts of the Pacific and Indian Oceans. The best method to use when targeting these fish is trolling with live bait or lures.

How to identify Striped Marlin

Striped marlins are known for their tall front dorsal fin that’s almost as tall as the fish is long. The front dorsal fin almost covers this fish’s entire back. Both the dorsal and anal fins of the striped marlin are pointed with soft rays, making it easy to fold them flat against their bodies. The coloring on the striped marlin is dark blue on their backs and upper sides, graduating to white as it gets closer to the abdomen. These fish have blue markings on their fins, and lighter blue vertical markings on their sides that, unlike other marlins, are present even after death.

Where to catch Striped Marlin

Striped marlins are found in the warm waters of the Pacific/Indian Oceans, where they stay within pelagic zones. As the season turns cold, they migrate to areas closer to the equator, returning to cooler waters when summer arrives. 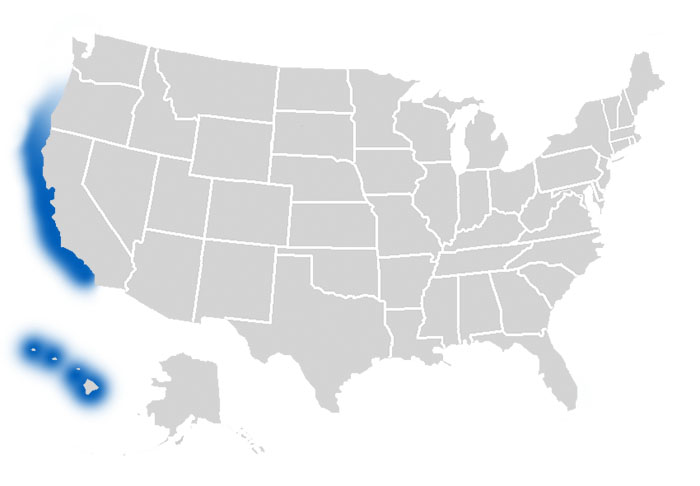 The following are habitats where you can catch Striped Marlin:

How to catch Striped Marlin

The striped marlin feeds on a wide range of prey that it aggressively hunts. Once hooked, anglers should be prepared to hold on for an intense fight. Striped marlins are known to fiercely leap, dart, and run hard. They’ll often leap into the air numerous times before they are reeled in. For this reason, anglers are advised to bring heavy gear when targeting these fish. The best method to use for catching striped marlin is trolling using strip or live bait, whole fish, or lures.

The following are effective fishing methods and techniques for catching Striped Marlin:

Both lures and baits will work for catching the striped marlin. Some options for baits include mackerel, flying fish, squid, and anchovies.

The following are fishing lures, bait and tackle that can be used to catch Striped Marlin: