Smooth-hound, also known as dogfish, is a species of shark that inhabit the west Atlantic and east Pacific Oceans. Smooth-hound sharks are generally found near inshore areas and are most abundant from South Carolina to the Chesapeake Bay. Anglers can catch smooth-hounds bait casting, bottom fishing, jigging, still fishing, and surf casting.

How to identify Smoothhound

There are 25 species of smooth-hound shark. A smooth-hound is small to medium-size shark that reaches nearly 6 feet in length and weighs around 30 pounds at adulthood.

Most smooth-hound sharks have slender bodies, with a tapering, blunt snout. They have large close-set oval-shaped eyes that are catlike in appearance.

They have a mouth full of numerous small, blunt teeth in both upper and lower jaws. Their teeth are not sharp and have been described as pavement-like.

Their coloring is grey to grey-brown on the sides and pale gray-yellow-white on the abdomen. They have an uncanny ability to slowly change color by contracting or relaxing.

Smoothound have two large spineless dorsal fins, with the first noticeably larger than the second.

Where to catch Smoothhound

Smooth-hound sharks are found in oceans throughout the world. These sharks can be found in the west Atlantic from Uruguay to the Bay of Fundy and along the east Atlantic coast.

Seven species of Smooth-hound shark are endemic to the western Atlantic Ocean. They are commonly found from Delaware Bay to Cape Cod. During the winter, Atlantic smooth-hound sharks tend to congregate between South Carolina and the Chesapeake Bay. Although they are rarely found up near Canada, the Bay of Fundy is the exception.

Smooth-hound shark typicaly inhabit inshore waters around 50 feet deep, though they have been found as deep as 656 feet. Smooth-hounds reside on continental shelves, upper slopes, bays, and other inshore waters. 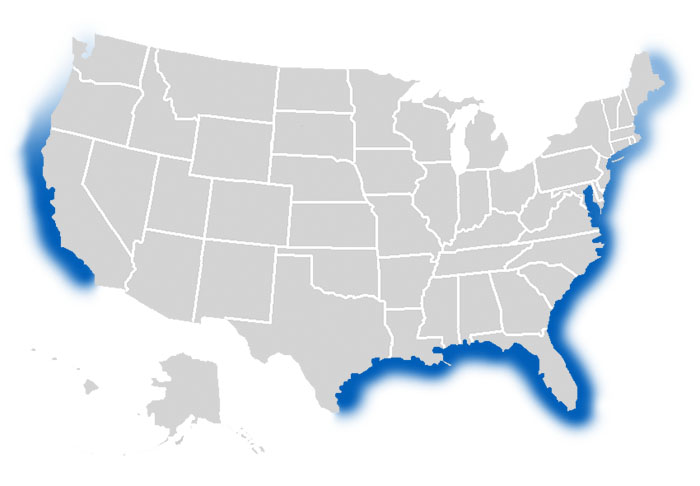 The following are habitats where you can catch Smoothhound:

How to catch Smoothhound

To catch the smoothhound, anglers should use light tackle that includes a 5-7 ft. rod and spinning reel with a 10-12 test line, small-medium hook, and sinker. Anglers sometimes choose to fish while anchored at 30 feet depth, or while drifting. When casting, the bait should be allowed to reach the bottom, then should be jigged at intervals. Those who prefer to fish in surf water or from a pier should cast 10-15 feet out. The movement of the water will automatically jig the line. Anglers should periodically reel in their bait and re-bait as needed. When the fish bites the hook, it should be allowed to run for a few seconds. Then, it should be reeled in while carefully keeping the line from tangling. If fishing from a boat, anglers should keep the line out and away from the boat. The best methods for catching smoothhounds are bait casting, bottom fishing, jigging, still fishing, and surf casting.

The following are effective fishing methods and techniques for catching Smoothhound:

The best baits to use for smooth-hound fishing are strips of squid, herring, and mackerel, although pieces of bonefish, bunker, mullet, and peeler crab also work well.

The following are fishing lures, bait and tackle that can be used to catch Smoothhound: