Found in North America from North Carolina up to Maine, scups are migratory, bottom-dwelling fish. There are several effective methods for catching these fish, including still fishing, saltwater jigging, bottom fishing, surf casting, and spin casting. Scups respond best to baits such as marine worms and squid. 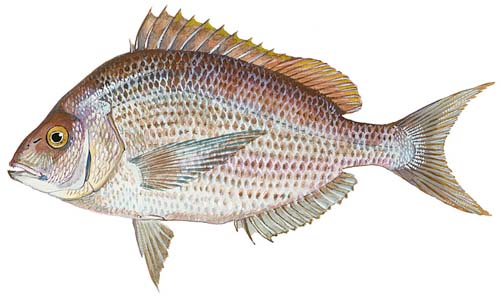 How to identify Scup

Scups are medium-sized fish that are often referred to as “porgies.” They have high, flat profiles, and spines along most of their dorsal fins. The brown body of a scup is covered with shimmery, silver scales that give them the appearance of having rainbow colors. Their mouths are small, yet their narrow jaws are strong and filled with sharp teeth. They can grow as long as 18 inches and weigh up to 4 pounds. They can live up to 20 years.

Where to catch Scup

These fish can be found in the Atlantic along the east coast from North Carolina up to Maine. They are migratory, moving closer to the shoreline from May through October. In the winter, they move south in deep offshore waters.

The following are habitats where you can catch Scup:

How to catch Scup

Anglers typically use drift fishing, fishing bottoms, and jigging with medium tackle to catch scups. Other successful methods include spin casting, still fishing, and surf casting. A spin rod or reel combination capable of holding a 14-pound test line are recommended. For better casting distance, anglers should use fused or braided lines. For boat casting, the bait should be cast to reach the bottom, then jigged up and down slowly. If casting from the shore, baits should be allowed to reach the bottom, then reeled in until the line is taut. Scups are relatively easy to snag and are often accidentally caught by anglers pursuing other fish. Fly fishing isn’t an effective method because scups are bottom dwellers, yet they may sometimes school along the surface, and in that case, they can be caught using small closures or rain bait flies.

The following are effective fishing methods and techniques for catching Scup:

The best baits to use for catching scups include squid, marine worms, and clams.

The following are fishing lures, bait and tackle that can be used to catch Scup: