The scamp grouper is a much sought-after game fish. In North America, it can be found from the Gulf of Mexico to North Carolina. Several methods are used to catch the scamp grouper, including drift fishing, bottom bouncing, saltwater jigging, night fishing, and still fishing. Live baits are the best option for snagging these feisty fish.

How to identify Scamp Grouper

The scamp grouper has long rays that extend out from its caudal fins, in a fashion similar to broomtail groupers. Scamps share the same body shapes as other groupers; however, scamps are khaki/brown and have dark markings. Like other groupers, scamps come into the world as females, but morph into males as they mature. Once the scamp grouper reaches 12 inches in length, it is considered sexually mature. Females are smaller than males. Adult scamp grouper typically reach 10 pounds when fully grown, but some may grow as large as 30 pounds.

Where to catch Scamp Grouper

Scamp Grouper are abundant in the Gulf of Mexico and extend from Florida up to North Carolina (and sometimes as far north as Massachusetts). Larger scamp grouper are typically found in the warmer waters of the Gulf. They prefer water that is between 100 to 300 feet deep, though they can be found in shallower waters during spawning season. Most anglers target larger Scamp at depths of 150 feet or deeper.

Adult scamp grouper are found around natural and man-made structure including reefs, rocky ledges, and shipwrecks, where they remain hidden until prey ventures within striking distance. Young scamps prefer the shallows around mangroves or jetties. When targeting adult scamp, fish the bottom side of structure in relation to the current. Fish drops and ledges with 5 to 10 feet of relief. 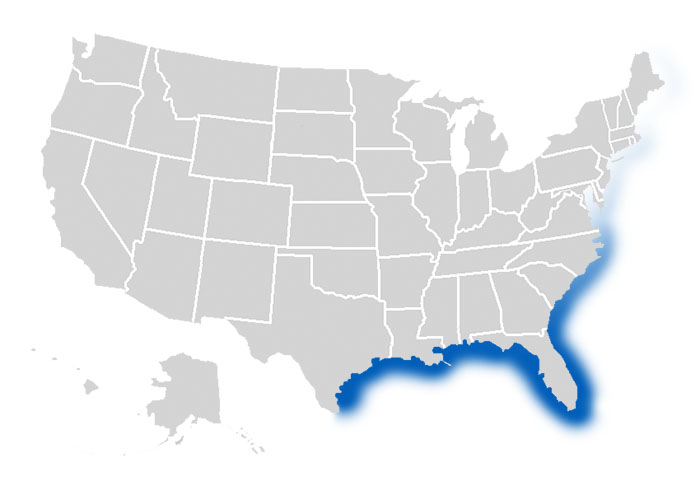 The following are habitats where you can catch Scamp Grouper:

How to catch Scamp Grouper

Scamp grouper are often caught by drift fishing or still fishing while anchored. Heaving chumming techniques before laying your line will improve catch rate. Other effective methods for catching Scamps include bottom bouncing, saltwater jigging and night fishing. Unlike other grouper species, Scamps respond well to jigs. Anglers have reported bouncing a 6-8oz diamond jig along the bottom often produces a bite.

Scamp grouper can be caught using light tackle when fishing the shallows. Medium to heavy tackle, including a heavy duty conventional rod, is recommended with targeting Scamp grouper in deeper waters. Anglers will often use a weight to help get the bait to the bottom where Scamp feed. Because these fish can put up a pretty good fight, rods should be equipped with durable braided line.

Fishing rigs can also be used for Scamp fishing. The double drop bottom rig (aka 2-hook bottom rig), standard Carolina rig (with a 3-8 oz weight depending on current), Chicken rig with several hooks on the line above the weight, and knocker rig have all proven effective. A few anglers have reported success using size 1/0 Sabiki rigs with multiple small feather hooks attached to the line just above the sinker.

When targeting Scamp using the Carolina rig with live bait, allow the the rig to settle a couple times as it’s lowered through the water column to keep it from tangling. Also, hook your live bait through both lips.

The following are effective fishing methods and techniques for catching Scamp Grouper:

In relation to other grouper species, such as Gags and Reds, Scamp grouper tend to prefer smaller baits. Sometimes a large Scamp will ignore a jumbo, live pinfish in favor of a smaller one. Even with cut bait, sometimes smaller is better.

The following are fishing lures, bait and tackle that can be used to catch Scamp Grouper: