Mako sharks can be found in warm waters all over the world. Anglers often fish for them by first chumming with bloody or oily fish. Next, try catching them by night fishing, saltwater trolling, or drift fishing. Those who choose to target the mako shark should proceed with caution because they can be very aggressive.

How to identify Mako Shark

The term “mako shark” is a broadly used for two different shark species that belong to the same family – the shortfin and longfin mako. These sharks have proportionate bodies that feature a cone-shaped snout. The snout on the longfin mako is short and blunt compared to that of the shortfin mako. It also has bigger eyes and longer pectoral fins. The longfin mako has curved, knife-like teeth that can help with identification. Each tooth is flat on the front and curves inward.

The coloring on shortfin is vibrant bluish-gray or dark blue on their backs with lighter blue sides that graduate into a white abdomen and lower jar. Longfins also have light blue sides and a white abdomen; however, the lower jar is not white. Among the mackerel shark family, makos have the most vivid colors. Once dead, those bright colors turn into brown-gray.

Where to catch Mako Shark

These fish are present in warm waters throughout the world. They are agile and quick in the open oceans and prefer to be alone. Anglers have more encounters with shortfins because of the fish’s tendency to swim near shores. Longfins are rarely seen in the Gulf of Mexico and the Atlantic; however, they exist along the Cuban coast. 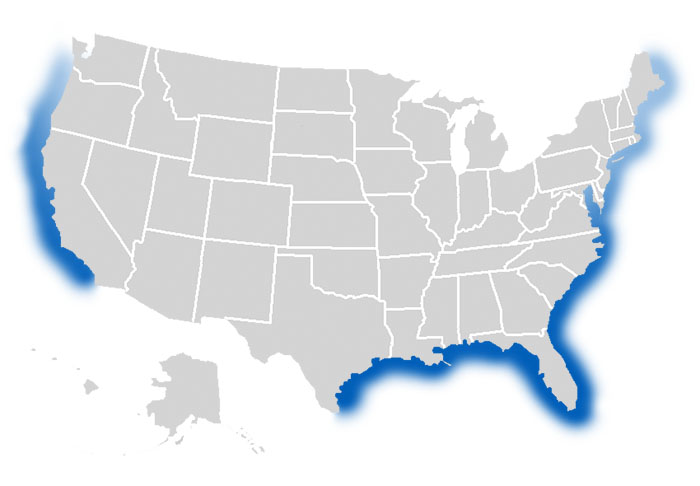 The following are habitats where you can catch Mako Shark:

How to catch Mako Shark

Makos are aggressive sharks that won’t hesitate to attack a boat or a human. Commercial fishermen typically catch makos while trolling with whole, live bait or lures. As with most sharks chumming is effective at getting them close to the boat. Once hooked, these sharks will put up a fierce fight, often rolling, diving, and making advances towards the boat. Mako sharks have been known to jump as high as 30 feet into the air. They will often attempt to bite some vessels and may make unexpected leaps that land them on the boat. Those fishing from a boat should be extremely cautious when fishing for mako sharks because they can inflict serious damage. When it comes to catching the mako shark, the best methods to use are chumming, drift fishing, night fishing, and saltwater trolling.

The following are effective fishing methods and techniques for catching Mako Shark:

Chumming with bloody or oily fish works well for attracting the mako shark. Once they are close to the boat, tempt them with lures baited with tuna, mackerel, squid, or mullet.

The following are fishing lures, bait and tackle that can be used to catch Mako Shark: