Mostly found in the Pacific Ocean, king salmon are also occasionally spotted in the Arctic Ocean. With eyes that are sensitive to light, they tend to stick closely to the bottom. Popular methods for catching them include still fishing, trolling, drift fishing, and jigging. Bright-colored flies or lures are a great choice when targeting these fish.

How to identify King Salmon

King salmon have the standard salmon body type. The sea version of the king salmon is silver with markings on its fins, upper flanks, back, and upper head. Comparatively, when spawning, they are dark green-purple-brown with some red. Spawning induces a profound change in king salmons, notably with males developing prominent kypes. These fish have black gums and mouths, whereas other species have white gums and a black mouth.

Where to catch King Salmon

King salmon are the biggest of the Pacific salmon, but they have the lowest population. Their natural habitat is in the Pacific Ocean. They will rarely be found in the Arctic Ocean, Okhotsk Sea, Sea of Japan, and Bering Sea. King salmon have been introduced throughout the world, including the Great Lakes, coastal states in the U.S., parts of Central/South America, South Pacific, and Europe. 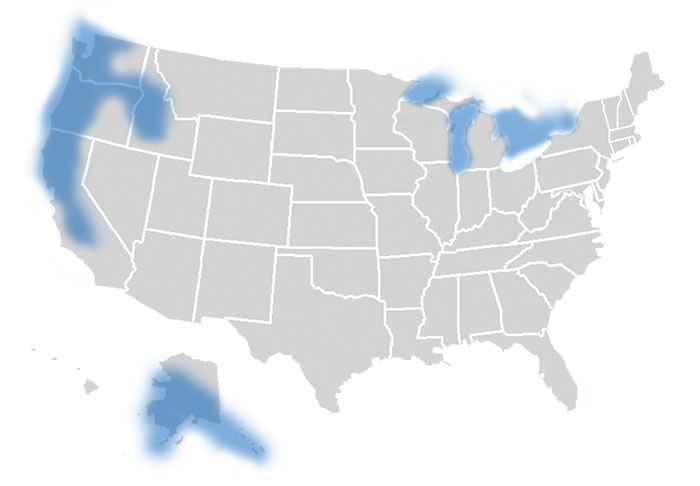 The following are habitats where you can catch King Salmon:

How to catch King Salmon

Because the king salmon is light-sensitive, it is normally found near the bottom. This makes weighted baits a must when fishing for them. Head out in the early morning or evening for the best chances of catching one. King salmon can be caught by drift fishing, jigging, still fishing, and trolling. Fly fishing can also be effective, but anglers should be careful not to swing too far. Trolling and rigging works well when fishing for king salmon in lakes.

The following are effective fishing methods and techniques for catching King Salmon:

When fly fishing for king salmon, choose flies hat are brightly colored. When trolling, choose lures such as spoons, plugs, and live and dead bait.

The following are fishing lures, bait and tackle that can be used to catch King Salmon: