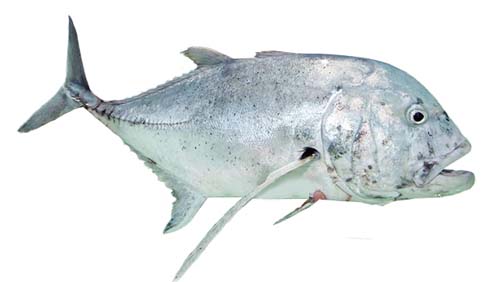 How to identify Giant Trevally

The Giant Trevally is usually a silvery color with dark spots present on some specimens. Adult male GianT Trevally may be black. The breast of the Big Trevally is covered in scales. In contrast, Giant Trevally have a small oval-shaped scaled patch centered on the body just before the ventral fins. The oval-shaped patches of scales are quite large in only about 5% of Giants, making it challenging to identify them based on this characteristic alone. The Giant Trevally has a blunt snout located on a deeply set head and body, and a lateral line which curves forward. Giant Trevally have 25 to 33 scutes on the straight part of the lateral line, where Bigeye Trevallies have 28 to 37 scutes. Eight spines are present on the first dorsal fin, 17-21 soft rays on the second dorsal fin, three spines, and 15-17 soft rays on the anal fin. The first gill arch on the Great Trevally contains 18 to 23 rakers. The operculum on Giant Trevally is absent of markings, which are present in Bigeyes. The base of the pectoral fins also lacks any markings, unlike Crevalle Jacks where the pectoral fins have markings.

Where to catch Giant Trevally

This fish is present among rocky coral reefs in warmer water in the Indian Ocean and Pacific Ocean (central.) Their occurrence extends as far as Hawaii, Marquesas Islands, Kenya, areas of Africa, Australia, New Zealand, Malaysia, and the Philippines. In Hawaii and Kenya, it’s the most common species of Trevally present. In Hawaii it is common to fish for Giant Trevally from shore using conventional reel and long rod in order to cast beyond the rocks. 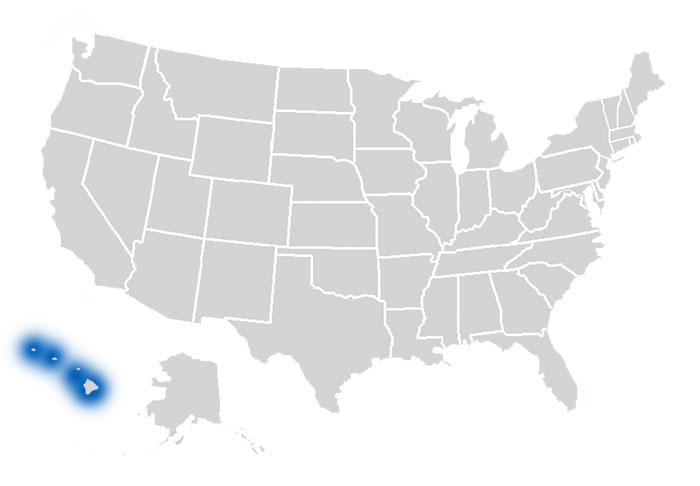 The following are habitats where you can catch Giant Trevally:

How to catch Giant Trevally

Adults are typically idle during the day, staying in the outer range of reef drop-offs or within rocky shorelines. At night, they come alive to feed. Anglers in Hawaii find that these fish are far more active in feeding during very dark nights. This big fish will put up a tough fight when hooked, making them a highly desired sport fish in Kenya and Hawaii. Effective methods to catch this fish include trolling with bait (mullet, herring, garfish, anchovies, cut/strip bait, sauri, squid) or lures (jet head, feathers, jigs, spoons.) Many anglers report using topwater lures to catch Giant Trevally is most enjoyable. Giant Trevally can also be caught using drifting, still-fishing, or surf-casting techniques.

The following are effective fishing methods and techniques for catching Giant Trevally:

The following are fishing lures, bait and tackle that can be used to catch Giant Trevally: