Coho salmon (aka Silver salmon) is a popular sport and commercial fish. It is found in fresh and salt water habitats including brackish water (mix of freshwater and saltwater) estuaries and the open ocean. Drift fishing, fly fishing and jigging are effective techniques for catching Coho salmon. The best baits include fishing flies, spin casting lures, live bait and roe.

How to identify Coho Salmon

The sea version of the coho salmon has a silver body and small markings along its back, upper flanks, upper tail-lobe, and at the base of its dorsal fin. Cohos have markings in the upper portion of their tail, whereas steelhead salmon, Chinook salmon, and rainbow trout have markings throughout the tail. The mouth of the coho is black with white gums, though some of these fish in the Great Lakes may have darker-colored gums. During spawning, male cohos develop a horizontal red marking on both sides, just as rainbow trout do; however, females don’t undergo any significant changes. Spawning males develop a hook-like protrusion known as kypes on the upper and lower tips of their jaws. These kypes prevent these fish from closing their mouths.

Where to catch Coho Salmon

The coho salmon can be found in the Pacific waters from Alaska’s Point Hope to California’s Monterey Bay. They have been seen on occasion down near Baja California, Mexico. These fish were introduced to Alaskan freshwater lakes, coasts of Maine, Maryland, Louisiana, and the Great Lakes.

Cohos generally stick to bigger rivers that connect to the ocean where the waters are calm. Young cohos mostly live in freshwater, but as they get older, they move to more brackish waters and then on to the ocean. 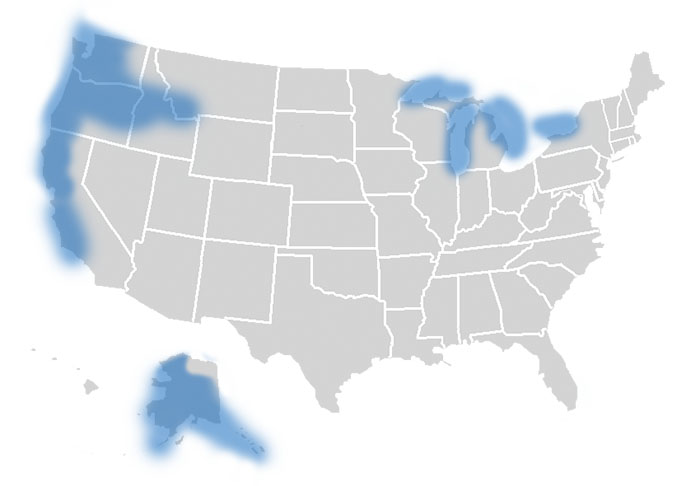 The following are habitats where you can catch Coho Salmon:

How to catch Coho Salmon

Anglers enjoy fishing for coho salmon because of their spunk. When caught, they’ll put up quite a fight. Swinging spinners work well in faster waters, while twitching jigs are preferred for calmer areas. Float fish roe, where anglers swing a cut roe with a hook attached into the water, works in both fast and slower waters. The coho salmon is also a fun fish to pursue with fly fishing. Single hand rods with strong handles work best for fly fishing.

The following are effective fishing methods and techniques for catching Coho Salmon:

Anglers looking to catch coho with a normal rod and reel, should choose lures such as trolling flies, spoons, and plugs. Live bait, such as roe and minnows, also work well. When fly fishing, choose woolly buggers, leaches, and various minnow patterns in bright colors. Using a salmon rig to improve bait and lure presentation can improve catch rates.

The following are fishing lures, bait and tackle that can be used to catch Coho Salmon: