Blacknose Sharks thrive in the bays, estuaries and lagoons off the shores of Virginia, Florida, the Carolinas and Bahamas. They prefer shallow waters with reefs and sandy bottoms. The best technique for catching Blacknose Sharks is chumming the water followed by spin fishing, fly fishing or bait casting using mackerel or bluefish for bait.

How to identify Blacknose Shark

Blacknose sharks are streamlined fish with snouts that are long and round. Their eyes are situated just behind their nostrils. They have a skin flap over each nostril that controls the in/out flow. Both jaws have multiple rows of serrated, triangular teeth. The upper teeth are stronger and bigger than those on the bottom. Blacknose sharks have five gill slots on each side above the origin of the pectoral fins. Their front dorsal fin looks like a sickle. Their rear dorsal fin is shorter than the front. The blacknose shark’s body is covered in overlapping denticles. Its upper flanks are dark gray/green/brown/yellow, while its abdomen is a white/pale yellow. It has a white tip on the top of its caudal fin, while its rear dorsal fin tips are dark.

Where to catch Blacknose Shark

The blacknose shark can be found along both insular and continental shelves in the Atlantic from Brazil up to North Carolina, the Gulf of Mexico, the Caribbean, and the Bahamas. They prefer areas with beds of marine vegetation, coral debris, and sand flats. Those living off the southern coast of the U.S. area are seasonal migrators, spending summers in the north and winters in the south. Blacknose sharks in the Gulf of Mexico also have the same migratory pattern. Adults tend to stick to deeper waters that are up to 210 feet deep, whereas juveniles prefer shallows that are up to 30 feet in depth. 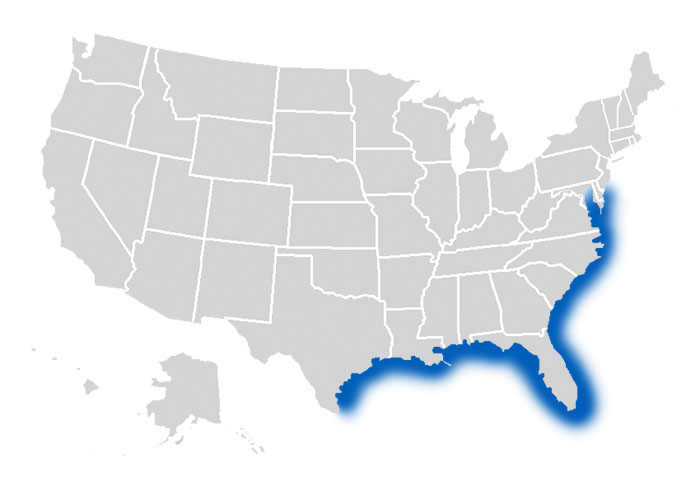 The following are habitats where you can catch Blacknose Shark:

How to catch Blacknose Shark

As with most other sharks, attracting them with chumming is a must. Use a 5-gallon bucket filled with two bloody fish to attract them, then try spinning-reel or fly fishing with light tackle baited with cuts of bloody fish. Wait for the shark to take the bait, then reel them in as the hook sets in its mouth. Once the hook is set, keep the line tight so keep the shark from diving deeper. Anglers should keep the boat’s motor running so they can move the boat quickly away from the shark, if needed.

The following are effective fishing methods and techniques for catching Blacknose Shark:

The following are fishing lures, bait and tackle that can be used to catch Blacknose Shark: