Atlantic Salmon are a popular game fish and excellent table fare. They can be found in various fresh water streams, rivers and lakes, as well as saltwater estuaries and the open ocean. A popular technique for catching Atlantic salmon in rivers is swinging flies. Simply cast downstream to the opposite shore, allow the fly to flow with the current and swing across. Repeat the process until you get a bite.

How to identify Atlantic Salmon

While the Atlantic salmon is at sea, it takes on a different appearance compared to when it’s in freshwater. The Atlantic salmon typically looks much like a trout; however, while in the ocean, it has a silvery body speckled with sparse, dark markings resembling “Xs” or “Ys.” These markings are located on the forward half of its body and may also be found in the cheeks or gills.

When moving inland to freshwater for spawning, the Atlantic salmon changes color from silver to a rusty-bronze to attract a mate. It now has a similar appearance to its nearest relative, the brown trout, because of red markings that appear on its body and head. These red markings lack the “X” or “Y” shapes apparent while at sea. However, the red markings on a brown trout are more pronounced than those on the Atlantic salmon and have a circle/semi-circle outline that extends down the fins’ bottom-side, including the adipose fin.

Adult Atlantic salmon returning from the ocean to spawn in fresh water are 4 years old. At this stage they will have spent 2 years in the freshwater where they were born and an additional two years at sea where they grew into their adult form. The average adult Atlantic salmon measures 28 to 32 inches in length and weighs between 8 and 12 pounds. The largest Atlantic salmon on record was caught in 1960 in Scotland weighing in at just over 100 pounds.

Where to catch Atlantic Salmon

In North America, Atlantic salmon are found in their native Atlantic waters of northeastern U.S. and Canada (Quebec, Newfoundland). Atlantic salmon live in the ocean and migrate inland to freshwaters for spawning. Once spawning is complete, they return back to the ocean. Landlocked Atlantic salmon never visit the ocean. 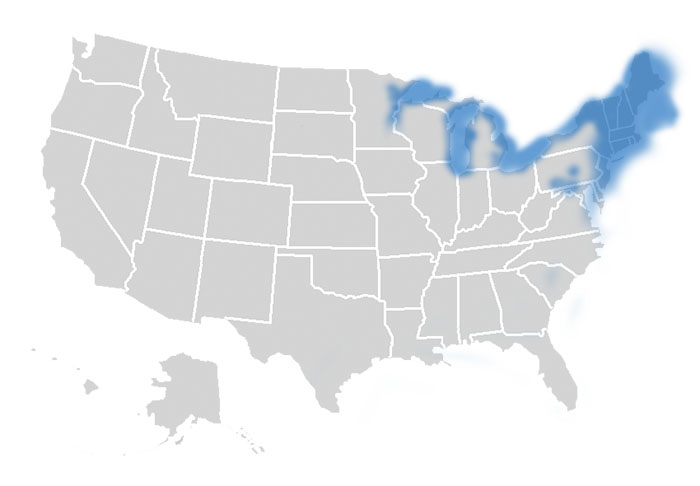 The following are habitats where you can catch Atlantic Salmon:

How to catch Atlantic Salmon

Many anglers enjoy fishing for salmon due to their excellent leaping ability and the strong fight that ensues when they are caught. One of the best methods for catching these fish is something called swing. For this method, the angler places the lure downstream at a 45 degree angle and lets it float on the current and swing by the fish. In the open ocean Atlantic Salmon can be caught jigging, still fishing and trolling in the open ocean using live bait, plugs and lures.

It’s important to note that Atlantic salmon are labeled as an endangered species in the United States and fishing for them is currently prohibited.

The following are effective fishing methods and techniques for catching Atlantic Salmon:

When fly fishing for Atlantic salmon, it is best to match your fly to the color of the water. Big flies work the best on cold days. Using a salmon fishing rig is also effective for targeting Atlantic salmon.

The following are fishing lures, bait and tackle that can be used to catch Atlantic Salmon: