Ice Fishing for Northern Pike: Where, When and How 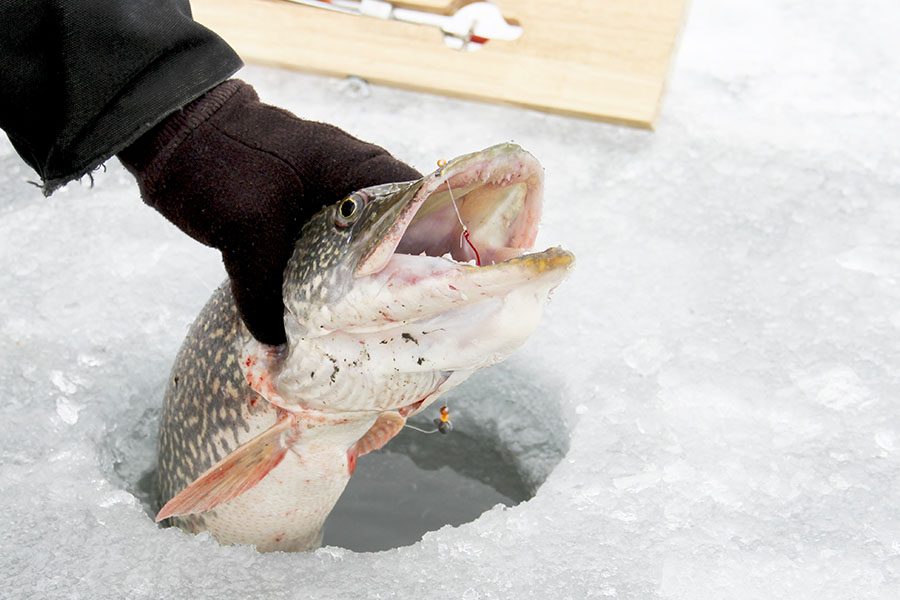 The Northern Pike is one of the few species of game fish that will rouse me from my warm bed at the first light of sun to spend hours sitting on a frozen lake in the dead of winter. I love ice fishing for pike. Big, aggressive, and a ton of fun to catch, the Northern Pike is the apex predator for most of the frozen lakes in the U.S. and Canada. Targeting these toothy predators requires knowing their habits, when they’re feeding, and the appropriate fishing tackle. With this guide, I will break down all these points to give you the best chances of landing that trophy Northern through the ice.

Waiting silently at the edge of the underwater grass flat, the Northern Pike remains completely motionless. Only its eyes flicker and shine as it steadfastly observes the perch foraging for insect larvae just a couple feet away. Completely invisible amongst the fallen tree limbs it waits patiently for just the right moment to strike. A hungry perch seeing a small larvae swimming on the edge of the grassy flat cautiously moves out of the safety of the weeds for an easy meal, but in a flash of green and teeth, it’s all over. The perch is gone, and a well fed Northern Pike nestles itself back into striking position within it it’s hiding spot. Waiting for its next meal.

When and Where to Go Ice Fishing for Northern Pike 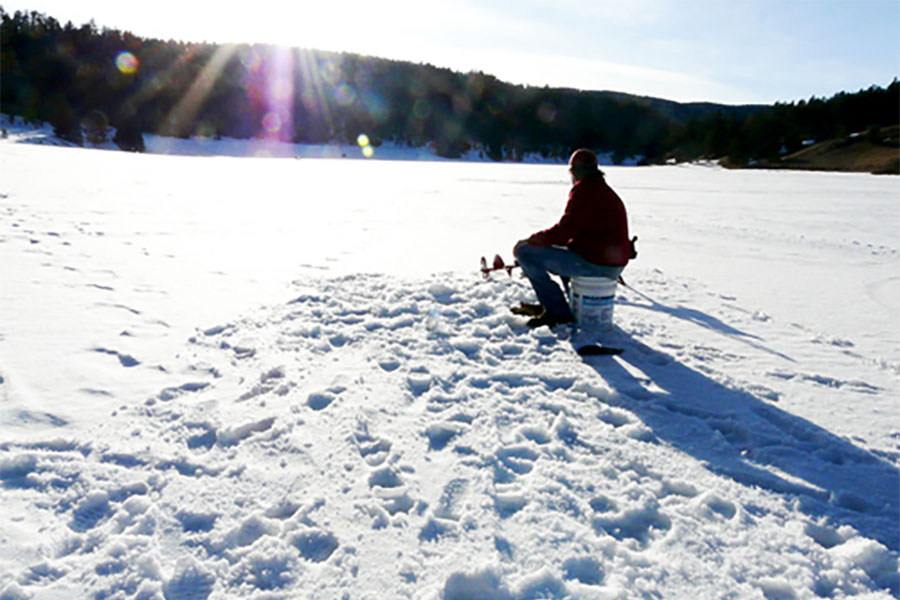 Black Hills National Forest, South Dakota.
As its name suggests, the Northern Pike is found in the temperate and northern states of the U.S. and Canada. They can inhabit any lake, river, or stream with a sustainable food source and that remains cool throughout the year. Researchers have found that Northern Pike is most active in waters between 45 and 75 degrees Fahrenheit. Temperatures above 75 will stress the fish too much, while colder temperatures below 45 degrees will cause them to be sluggish and slow due to a reduced metabolism.

When is the Best Time to Ice Fish for Northern Pike?

Northern Pike are apex predators of most freshwater ecosystems in the U.S. and Canada. They have incredible instincts and camouflage that keep them blended into their surroundings until it’s time to ambush an unsuspecting fish or amphibian. Pike can be caught throughout the day, and when ice-fishing, it’s always better to go out during the warmest part of the day when most fish the Northern Pike feeds on are active.

Many anglers will suggest that mid-morning is when pike are biting under the ice, but anywhere fro 10am to 2pm is ideal for ice fishing pike. But remember, pike a big, hungry predators and are likely to take your bait if you can get it in front of them.

States that offer the best Northern Pike fishing are located in the temperate and northern U.S and Canada. These lakes are also great for catching other pan-fish and Perch, the Northern Pikes’ natural prey items.

The following are a few of the top lakes, rivers and watersheds for ice fishing Northern Pike. 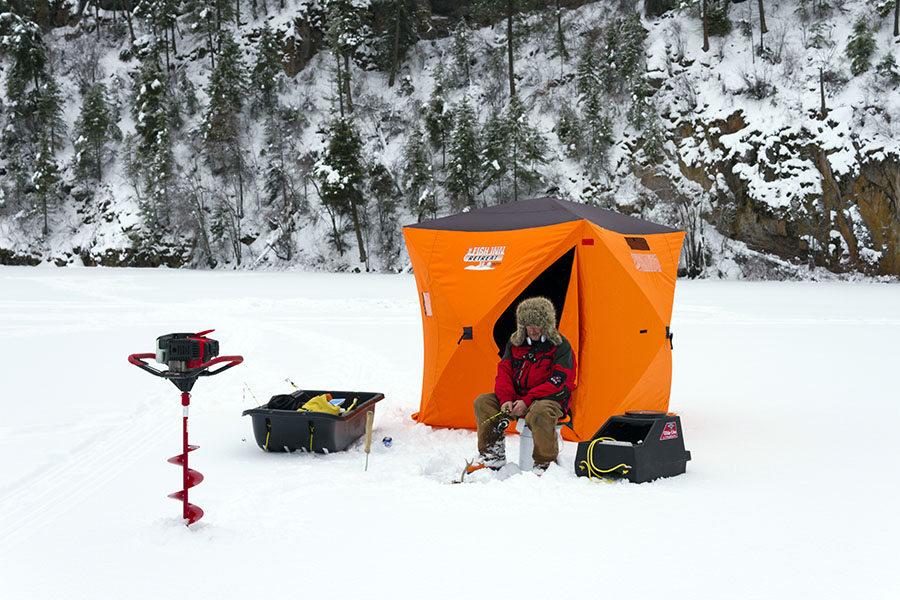 Northern Pike can grow to truly incredible sizes in healthy ecosystems. The current world record is over 50lbs! Because these fish can reach such large proportions, it is essential to prepare your tackle for the possibility of hooking a behemoth of a fish. The last thing any angler wants when ice fishing is to be entirely unprepared for connecting to a giant. 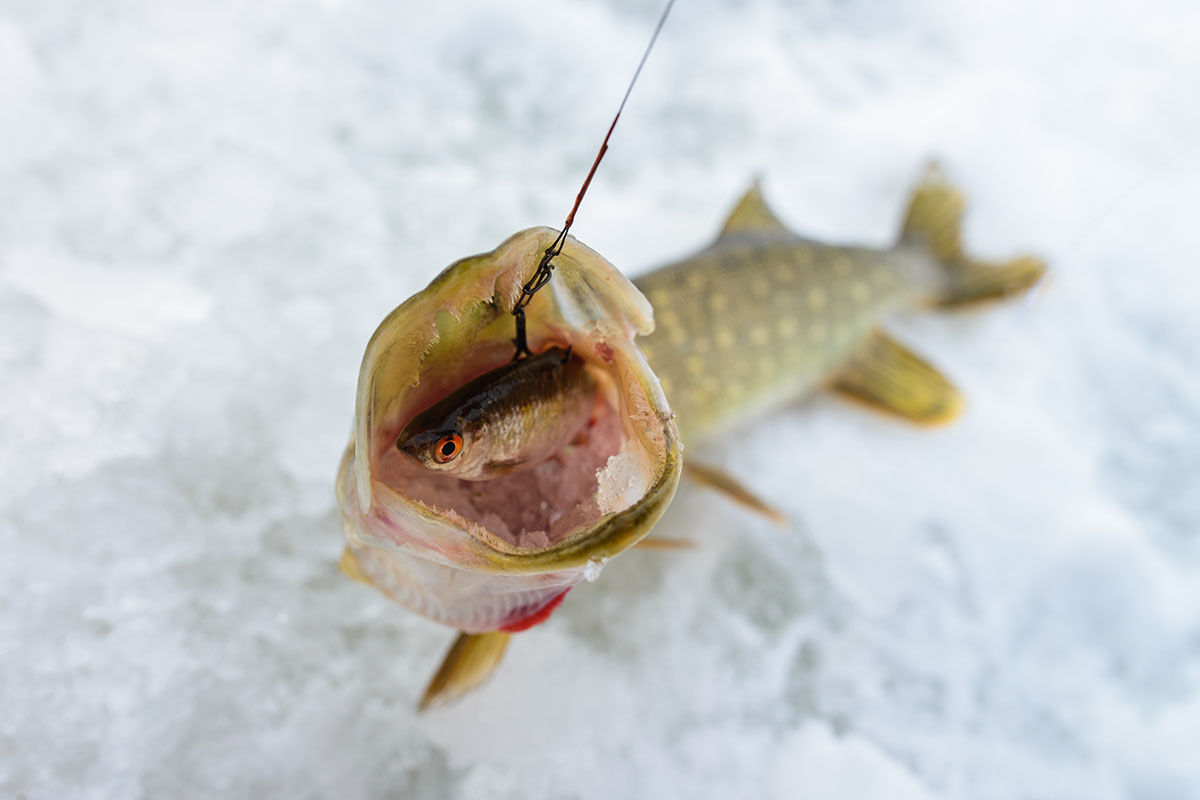 Because Northern Pike primarily preys upon fish, the best natural bait for Northern Pike is live baitfish and minnows. Live bait will always trump dead bait during slow days due to the increased vibrations and distress signals being directed into the water column, but dead bait will work in a pinch. Keeping bait alive on the ice is logistically tricky and generally requires a solid foundation of gear to be on hand to prevent the water from freezing over in your bucket.

When fishing for Northern Pike, size matters. Larger baits up to 8 inches long are perfectly acceptable for Northern Pike during the cold winter. I have personally seen Northern Pike try to eat things as big as they are when food is scarce, so don’t worry about your bait being too big.

If you are going to fish for Northern Pike with artificial lures, be prepared to bore a lot of holes and be willing to move on if the bite isn’t happening. Large Northern Pike are primarily solo hunters that may occasionally be in groups of 2 or 3 if there is enough food to go around. When using artificial lures, it’s best to spend about 20 minutes in each hole, then move on to the next a few dozen yards down the bank.

The Best Methods for Targeting Northern Pike Under the Ice 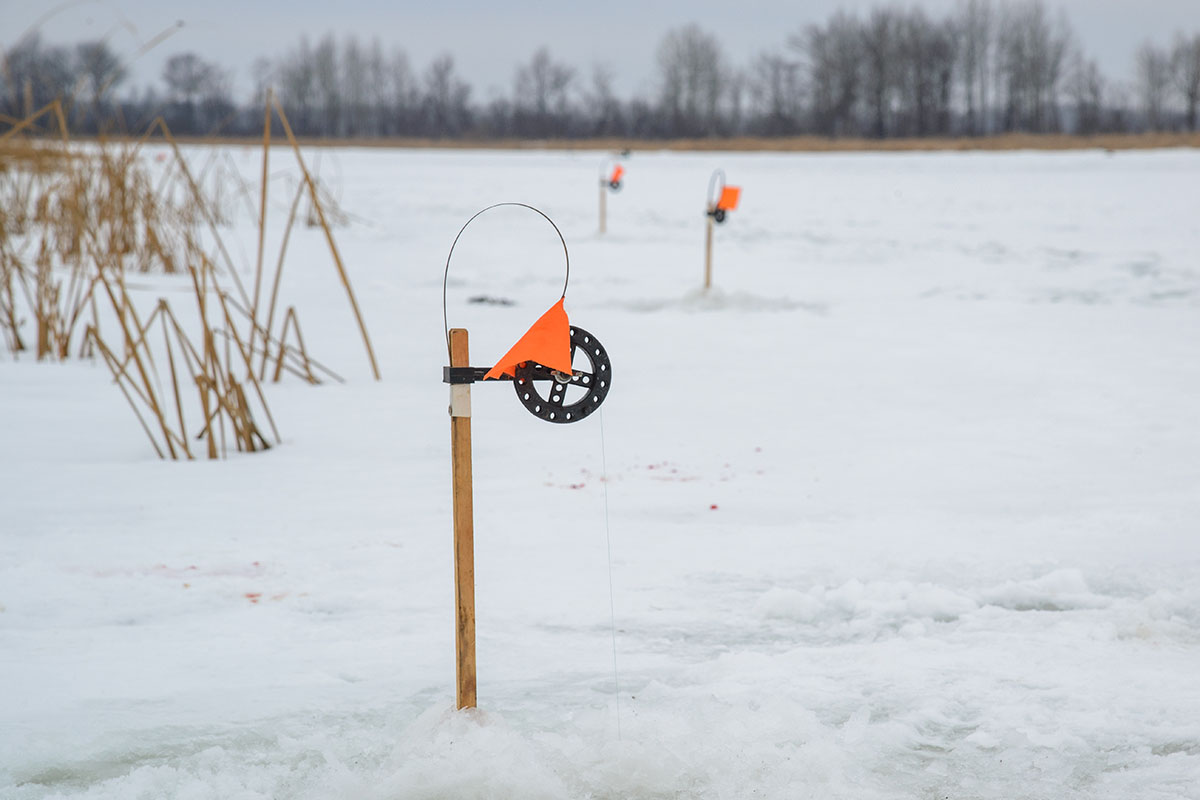 As with any species of fish, there are countless methods and small details that can make or break a day. With all that has been mentioned, here is a quick overview of some of the tips for catching Northern Pike through the ice.

The mighty Northern Pikes’ willingness and size to strike hard and fight harder have given them an excellent reputation amongst anglers young and old. These highly skilled predators remain at the top of the food chain even when ice covers the lakes, rivers, and streams in the north, providing angling action all year around. Targeting Northern Pike can be a slow and patience straining process. However, the end product is worth the wait. Most ice-anglers keep their spots for catching these predators a secret and frequently are discovered when fishing for Perch or other species. I’ve outlined the general zones, tackle, and methods to catch them. Now it’s up to you, dear angler, to pull one out of the ice. 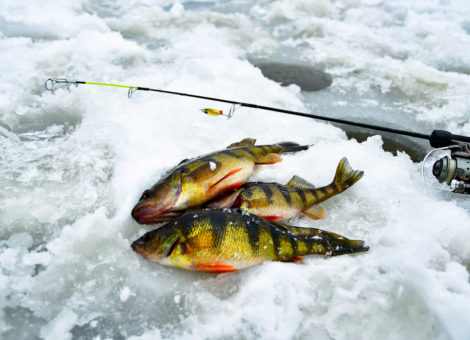 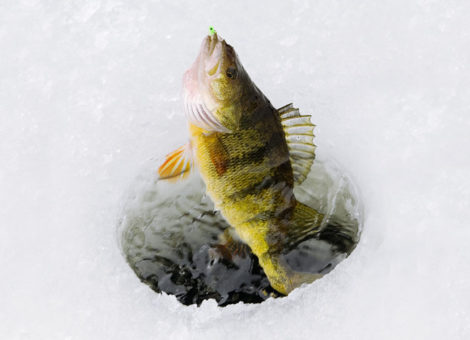