The pumpkinseed sunfish is found in freshwater locations in the northeastern U.S. Good methods for catching them include still fishing, fly fishing, baitcasting, and drift fishing. They respond best to worms and other small, live bait, but will hit on flies as well. 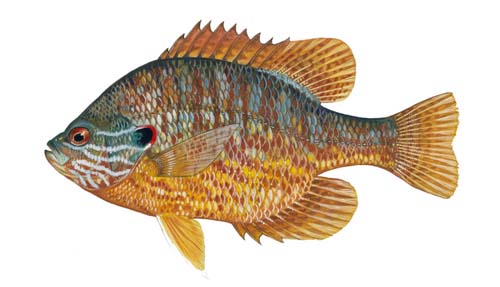 How to identify Pumpkinseed Sunfish

The pumpkinseed sunfish is often referred to as the pond perch or common sunfish. It is a vibrant freshwater fish. The pumpkinseed stands out with its spectacular color ranges of brown, yellow, green, or blue on its top and sides. Its back is dark olive green, and it has a lighter color of white, cream, yellow, and more rarely, orange, on the bottom areas of its body. It has a small mouth and a flattened, disk-like body. Its pectoral fin can extend past its eye when pointed, and the first dorsal fin is spiny. The pumpkinseed sunfish has a short, fixed gill covering with a thick, short feeding filter. The normal adult length is 4-6 inches, although it can grow up to 12 inches.

Where to catch Pumpkinseed Sunfish

Found in ponds, smaller lakes, creeks, and rivers, these freshwater fish can dwell in both cool and warmer waters. They often live in areas that have aquatic growth or bushes. They are a schooling fish and prefer shallow, unmoving waters that are close to the shore. Adults can sometimes be found in small groups traveling in deeper, protected waters. They are most plentiful in the northeastern region of the U.S. and are not found in the southwest. They rest on the bottom of the water near rocks or logs and tend to stay close to where they consider home, even if they are captured and released. 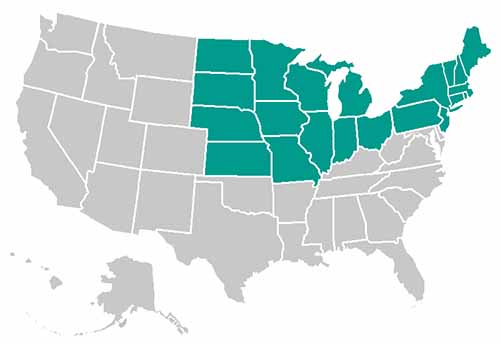 The following are habitats where you can catch Pumpkinseed Sunfish:

How to catch Pumpkinseed Sunfish

Pumpkinseed sunfish are very active during the day. The best method to catch them is pole fishing with 18-foot poles. Baitcasting and still fishing work well in the hotter months. Some good methods to try during other months include drift fishing and fly fishing. Simple lures work best for them, such as a rig with a bobber and small sinker. These fish tend to bite quickly. Smaller pumpkinseed sunfish stick closer to shore, while the larger ones are found offshore.

The following are effective fishing methods and techniques for catching Pumpkinseed Sunfish:

The best baits to use for pumpkinseed sunfish are worms and other small, live bait. Flies, poppers, or spinners can be used as well.

The following are fishing lures, bait and tackle that can be used to catch Pumpkinseed Sunfish: