Known as good fighters, northern pike are most often found in northern North America. They are usually caught by trolling, though other methods like spin casting, still fishing, and fly fishing will work as well. When targeting these fish, be aware they have very sharp teeth that can inflict a lot of damage if not handled correctly.

How to identify Northern Pike

Northern pikes look similar to muskellunges and pickerels because of their duck-bill-shaped mouth, elongated body, and rear dorsal fin. The coloring on their bodies ranges from green to grey and fades to yellowish-white on their bellies. There are uneven rows of light yellow specks running down their bodies.

Where to catch Northern Pike

The northern pike is found mostly in the northern part of North America. They occur mostly in the Great Lakes, eastern New York, northern New England, the Ohio Valley and Minnesota. They’ve also been spotted in Missouri, Nebraska, Alaska, and Canada. They generally stick to rivers, lakes, and streams where they are found in the cooler, shallower areas. In the summer, they head to deeper waters. 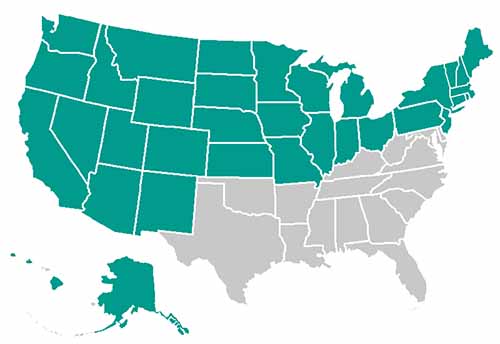 The following are habitats where you can catch Northern Pike:

How to catch Northern Pike

Northern pike can put up a good fight. They have very sharp teeth, so once caught, they should be handled with care. They also aren’t the easiest fish to catch because they are quick swimmers. A medium-action rod is generally recommended and should be paired with a spinning reel. To avoid its teeth breaking the line, anglers should opt for 15- to 20-pound braided line. Look for these fish in coves, inlets, and bays that are thick with weeds.

Trolling using lures or natural bait is effective; however, still fishing, bait casting, and fly fishing also work well. After casting out the line, it should be reeled in at a slow, consistent speed. These fish like to toy with their food, so be careful not to reel it in too quickly.

The following are effective fishing methods and techniques for catching Northern Pike:

These fish like to attack their food. Lures are the best option – especially soft, plastic swim-baits, spoons, and inline spinners.

The following are fishing lures, bait and tackle that can be used to catch Northern Pike: