How to identify Largemouth Bass

Largemouth bass look very similar to smallmouth bass and other species of black bass (e.g. Redeye, Spotted, etc.) They are distinguishable from similar species by a large slightly slopped mouth that extends nearly to the rear of the eye. There is also a noticeable dip separating the first and second dorsal fins.

Largemouths are typically green or olive-green with dark, horizontal markings along their sides. Dorsal fins have soft rays, and the tail is slightly forked. As a largemouths age, their coloring tends to becoming darkering. Largmouth bass in murky water may become dark brown or nearly black.

Largemouth bass average from 1 to 4.5 pounds and 12 to 24 inches. The largest largemouth bass on record was 22 pounds and 4 ounces, captured by George Perry on Montgomery Lake in Georgia in 1932. While not common, every year anglers reel in a few largemouth bass in the 10 to 20 pound range.

Where to catch Largemouth Bass

These fish can be found throughout the U.S., though the largest populations of largemouths is in the southern and eastern United States. Because they are a popular game fish, they’ve been introduced around the world and can now be be found in Asia, Europe, South America, Central America, and Africa. 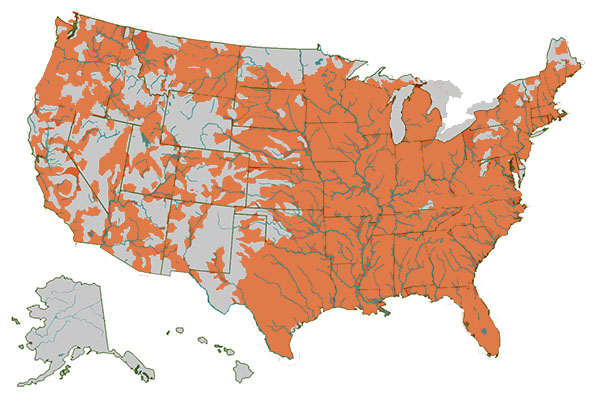 Largemouth bass live in freshwater lakes, rivers, and waterways, though they are most common in shallow lakes, ponds and the backwaters of pools. They also live in brackish (a mix of fresh and saltwater) waters. Their preferred habitat is vegetation with thick weeds or near sunken objects that provide cover where they can escape predation and ambush prey. Fishing along vegetation, under lilypads, and near structure is where you’re most likely to get a bite.

The following are habitats where you can catch Largemouth Bass:

When to fish Largemouth Bass

Largemouth bass can be fished year round. However, they are more active, and likely to bite during certain times of the year. As you consider when to go fishing for Largemouth bass, remember, these are cold-blooded fish. They’re going to be more active when water temperatures are a bit warmer and less active as temperatures cool drammatically. As a rule of thumb, you’re going to catch more bass during warmer weather.

Not surprisingly, summer tends to be the best time of year for Largemouth bass fishing. However, summer fishing conditions for Largemouths will vary regionally. Florida, Texas, Lousiana, South Carolina and other southern states are going to experience a longer more productive fishing season than more northerly states such as Michigan and Pennsylvania.

During the late spring and summer, early mornings and evenings are typically the best time to catch largemouth bass as they will try to escape the heat by taking shelter during the day. During hotter summer months, bass tend to be more active during the hours of the day when the water is cooler and the sun is not as strong.

As water temperatures cool off in late fall into winter, Largemouth bass’ metabolism slows and they become less active. During winter months, your best bet for catching largemouths is when the water is at it’s warmest between about 2 p.m. and sunset. But this time the sun has warmed the water a little, baitfish are active, and bass can feed.

Largemouth bass can also be targeted at night. Bass will often head for the shallows after dark in look of small bait fish and other morsels. At night, the best place to fish largemouth bass is along the transition where deep water is closest to the shoreline.

How to catch Largemouth Bass

Dragging is a popular method that includes using a plastic baits and a Carolina rig. The technique is performed by smoothly dragging the rig across an open target area. This works best in areas without a lot of vegetation. In areas with a lot of grass, anglers should try wacky fishing with worms.

While less popular, fly fishing is a tried and proven method for catching largemouths. If you’re a fly fishing aficionado, this just may be the technique for you. When fly fishing for largemouths, heavy gear is advised. Brightly colored flies usually help catch the fish’s attention. Use weighted flies in the late summer to help reach the deeper areas where the bass tend to congregate as the water temperatures cool.

The following are the most popular methods and techniques for catching Largemouth Bass:

The following are fishing lures, bait and tackle that can be used to catch Largemouth Bass: