The Brook Trout is one of the most sought after gamefish of northeast North America. It a fun fish to catch and makes an excellent table fare. Brook Trout are found in rivers and lakes throughout the northeastern United States and Canada in cooler waters. The most popular technique for catching Brook Trout is Fly fishing using a long fly rod. Brook Trout can also be caught using a spinning rod with spinners, lures, flies and insects.

How to identify a Brook Trout

The Brook Trout has white edging on its lower pectoral, anal and pelvic fins; and pale green-white curved markings (vermiculations) on the top of its head and back. Its flanks are have pale yellow/green and blue-haloed red markings. It has curved bold black markings along the dorsal fin. Body coloration is a basic olive-green/dark brown which turns into a bright white on the abdomen. During spawning, the lower sides and abdomen of male Brook Trout become a vibrant red-orange with black edging. Sea-versions of Brook Trout are often an iridescent silver-purple color with red markings. Tails are blockish with minimal indentation. All of Brook Trout’s fins lack spines and have soft rays.

Where to catch Brook Trout

Brook Trout’s native habitat includes streams, rivers and lakes throughout the Northeastern United States and central Canada. They are also found in the Great Lakes and Canadian Maritimes. Rarely will you find Brook Trout in waters over 68 degrees °F and Brook Trout cannot survive long in water above 80 °F. Brook Trout were first introduced at higher elevations in the Northwest United States, and today, it’s found from central Canada south into deep Texas (almost reaching Mexico). Brook Trout are now found in parts of Europe and Argentina. 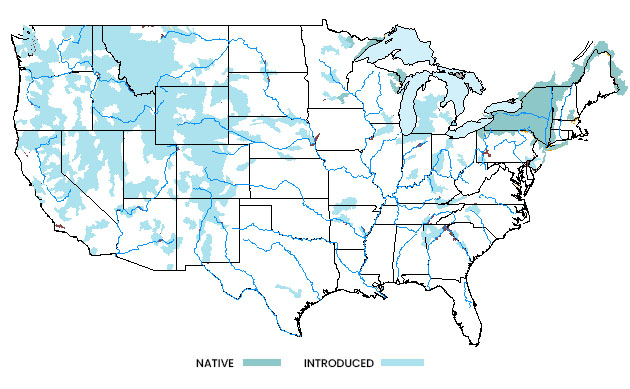 The following are habitats where you can catch Brook Trout:

How to catch Brook Trout

The following are effective fishing methods and techniques for catching Brook Trout:

The following are fishing lures, bait and tackle that can be used to catch Brook Trout: