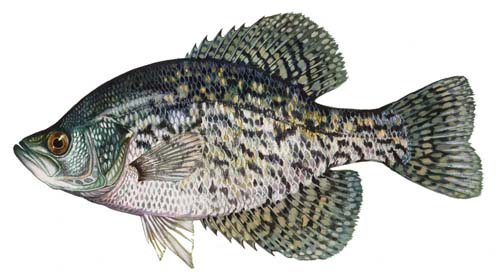 How to identify Black Crappie

Both black and white crappies are often confused with one another. They have the same coloring and markings – dark olive or black with spotted silver sides. The easiest way to tell the difference between the two is by looking at the pattern of the spotting. On a black crappie, the spots are irregular and scattered across the body. White crappies have more subtle spots arranged in vertical bars on their sides. The black crappie also has 7-8 dorsal spines, while the white crappie only has 6. The body of the black crappie is more rounded, whereas white crappies’ bodies are longer.

Where to catch Black Crappie

Black crappies are native to most of the eastern half of the United States. The black crappie has been transplanted so widely that it can be found throughout the United States and even into southern areas of Canada. However, in the part of the Midwest that reaches from western Texas up through Nevada, Colorado, Utah, Wyoming, Idaho, and western Montana, the fish is almost entirely absent. In this region it’s possible to find them along the borders of these states or in limited areas within.

Black crappies live in large, shallow ponds and lakes. Although they frequent shallow areas, they require deeper, cooler habitats than the white crappie. They prefer sandy or muddy bottoms and abundant vegetation.

The following are habitats where you can catch Black Crappie:

How to catch Black Crappie

Black crappies are easy to catch and will go after almost any bait as soon as it hits the water. They are most likely to strike at dawn and dusk. Anglers will often have success fly fishing for black crappie near bushes or fallen trees. Other effective techniques for catching Black Crappie include bait casting and still fishing. Effective baits and lures include spinners, jigs, crankbaits, worms, insects, minnows and nymphs.

The following are effective fishing methods and techniques for catching Black Crappie:

Anglers should choose a hook that is medium-sized. Black crappies respond well to live bait, such as worms, insects, and small minnows. They will also hit on lures, such as spinners, small (1-3in) crankbaits, and pan-fish jigs. Baits and lures can be presented using a variety of crappie fishing rigs.

The following are fishing lures, bait and tackle that can be used to catch Black Crappie: