The Owen Lupton rig works especially well for catching bull reds (aka red drums or redfish). Also known as the old drum rig, it uses a big circle hook with a squished barb, a short, heavy leader, and a 2 oz+ egg sinker in a fixed position. 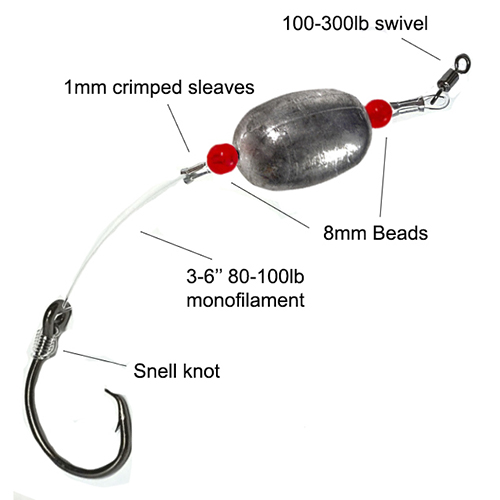 This rig is designed to avoid hooking a fish in the gut to allow for release once the fish is caught. Because the weight is heavily pinned, it works with the short leader to keep the hook from going too deep inside the fish. The thought is that once the fish gets to the sinker, it will stop ingesting the bait. This rig also includes a stationary weight, which helps place the hook in the side of the fish’s mouth so the fish isn’t badly damaged.

This rig is not designed to be used for beach fishing because the egg sinker makes the bait move around too much in the waves. Those who want to try this rig for surf fishing can modify it to make it work. To do this, use a pyramid weight instead of an egg sinker.